Identification is one of the most important issues in security and is often required in order to enforce other security properties. We always identify into a system when we login. We identify to our telephone provider through the sim-card in our phone and we identify to ATMs with our cards and PINs. Any time the access to a resource needs to be controlled, some form of identification is required.

Identification can also be though as authenticating a user or, more generally, an entity. The aim is to allows a verifier to check claimant‘s identity. As an example, in a login-password scheme, the user claims her identity by inserting the login. The system verifies the identity by asking for a secret password.

We typically require that an identification scheme does not allow impersonation: an attacker should not be able to impersonate another entity, even observing previous identifications. Moreover, we want to avoid uncontrolled transferability: the verifier should not be able to reuse a previous identification to impersonate a claimant with a different verifier, unless this is explicitly authorized by the user. Notice that the verifier might have more information available than an outside attacker since part of the communication might be encrypted.

Identification schemes can be based on various elements/aspects:

The most widely adopted identification scheme is login/password. The identity claimed through the login information is checked by asking for a corresponding secret password. By exhibiting the secret, a user directly proves its knowledge. Since the system needs to store the passwords of any user it is crucial that this information is somehow protected. The idea is to store a one-way hash of the password.

Definition (one-way hash function). A one-way hash h is a function that: (i) given arbitrary data x, h(x)=z is a fixed-length value z called digest that can be computed efficiently; (ii) given a digest z, it is infeasible to compute x such that h(x)=z.

The fact function h is one-way guarantees, in principle, that even if the whole password file is stolen no password can be recovered from its hash. In practice, we have to be careful for possible brute-forcing.

Since users typically adopt mnemonic, easy password, by bruteforcing over a dictionary of all words in a language we have good possibility of finding ‘easy’ passwords. To bruteforce it is enough to compute the hash of all the words in the dictionary (plus variants with capital letters, for example). This can be precomputed once for all and so a dictionary of pre-hashed words can be just queried for stolen hashes. More easily, we can can directly query Google or specific sites for hash inversion. For example:

which does the trick. This explains why systems are so paranoid with strong passwords: inserting symbols and numbers make the password ‘space’ much bigger and dictionary attacks much harder.

A standard technique to make dictionary attacks hard is to add a salt to passwords. A salt is a random number that is hashed together with the password. The salt is stored in the password file as cleartext. When the system needs to check a password, it first recovers the salt from the file and then computes the hash of the ‘salted’ password. This makes it harder to precompute the hashes of a dictionary since for each password we should try all the possible salts. A final trick is to make hash computation slow so that bruteforcing is slowed down. This is typically achieved by iterating many times the adopted hash.

Real implementations adopt many iterations of hashes of salted passwords. For example

is a Linux password for user goofy, hashed using the SHA512-based algorithm (identified by $6$), as it would appear in the /etc/shadow file of a Linux system. By default SHA512 is iterated 5000 time, but this value can be picked in the interval from 1000 to 999999999. String ‘Lc5mF7Mm’ is the salt and the remaining data is the hashed salted password. This can be checked/recomputed using, for example, the crypt function in python, once we know the cleartext password ‘donald’:

or the mkpasswd command line tool:

Increasing the number of iterations makes the process slower and, of course, produces a different result:

The salt is generated at random when the user changes his password and this makes pre-hashed tables very hard to compute, as in the following examples with mkpasswd

For example, Googling the hashed password give no results even if it is extremely simple and for sure contained in dictionaries.

One of the difficulties with brute-forcing is the space requirement: Storing the hash of a big dictionary and searching into it might become hard, especially if it exceeds the size of available RAM. Rainbow tables are a popular technique that allows for a time/space tradeoff. The idea is to build chains of hashes from a starting password p to a final hash z. To this aim, it is used a reduction function that, given a hash returns a password, whose hash is not required to match the starting one. A simple example of reduction function is the one returning a writable version of the first k bytes of the hash. The following code computes a chain of length 10 starting from message “donald”.

The idea is that this chain “covers” all the intermediated passwords and hashes even if we just store the initial and final value. For example, to invert

we first check if it matches the final hash. Since it doesn’t, we try to hash and reduce it for a number of steps at most the length of the chain. After 4 steps we get

thus to get the preimage we run 10-4-1 = 5 steps from the initial value donald as follows:

whose hash is our target

This can be generalized to a set of chains. Longer chains will save space but will require more time (long chains cover much more hashes but need more time to be examined).

The original idea is due to Martin Hellman [1] and it has been refined by Philippe Oechslin in [2] where rainbow chains are defined. The idea is to use different reduction functions at each step (such as the different colors in the rainbow) so to make the probability of ‘merging’ two chains or looping lower than in the above example, where the same reduction function is used. More detail can be found in the paper.

A PIN is a short numerical secret code typically used to protect a token such as an ATM card or a smartcard. It enables the token to perform the real authentication task and constitutes a second layer of protection: if the token is lost the PIN will protect its usage. Since PINs are short (4-5 digits) on-line attacks where all the codes are tried should be prevented. This is easily achieved by limiting the number of attempts before locking the token (typically to 3 attempts). Notice that similar countermeasures can be taken for passwords by, e.g., slowing down the login process after the insertion of one or more wrong passwords.

Since nowadays cards contain tamper-resistent chips that are able to physically protect PIN secrecy, the PIN is typically stored and checked in the card. There exist systems, however, that still check the PIN remotely. An example is the bank ATM network that we discuss below.

The worldwide ATM system is based on a protocol that sends the PIN typed at the ATM all the way to the issuing bank, which checks its correctness. To this purpose, the PIN is directly encrypted inside the keypad and is sent to subsequent bank network nodes where it is decrypted an re-encrypted all the way to the final destination. These cryptographic operations are all performed inside special tamper-resistant Hardware Security Modules (HSMs) so that the PIN never occurs in the clear outside the HSMs. Even the verification is performed by a special API call that takes as input the encrypted PIN and the user data and returns YES or NO depending on the correctness of the typed PIN. 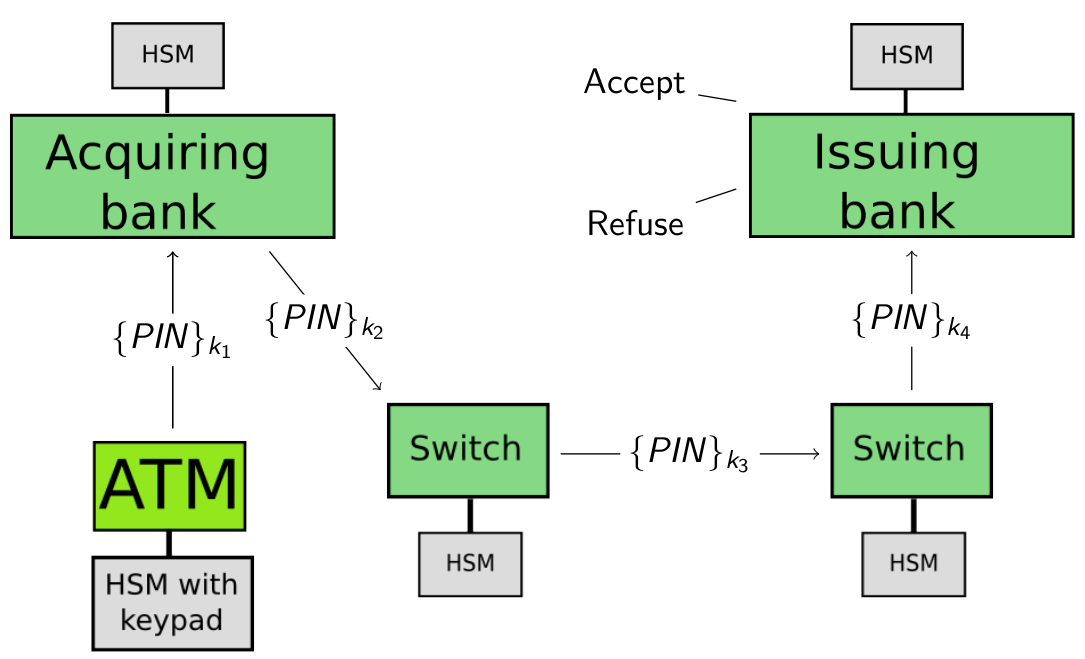 We exemplify illustrating the pseudo-code of the IBM 3624 PIN Verification method.

The answer is YES since the two PINs match.

Even if this computation is performed inside a sophisticated hardware, an attack is still possible that allows to recover all the PIN digits.

We assume to have intercepted data that gets a YES answer. So we know that PIN_Verify(EPB, account, dectab, offset) returns YES. The attacker modifies the dectab by, e.g., changing all the 0’s into 1 and queries again the HSM. We have two cases:

The answer is NO. We know that z3 contained at least one 0 digit. The trick to recover the position of the 0’s is to subtract 1, in turn, from any of the offset digits until we get again a YES answer. For our particular example this happens when we subtract 1 by from the first and last digit, i.e., offset’ = 04518:

The answer is again YES. We discover that exactly two 0’s appeared in z3 in the first and last positions. Now it is easy to compute the final PIN digits as 0+1 = 1 and 0+9 = 9, since 1 and 9 are the first an last offset digits, respectively. The attack can be optimized and iterated until the whole PIN is recovered, which takes less than 20 API calls. See the Mastermind and PIN cracking web page for more information and references.

The main problem with passwords, PINs and biometrics (even if we have not treated them) is that it is enough for the attacker to intercept/guess them once to re-authenticate as many time he wants. This risk is concrete as we need to show the secret in order to prove our identity. For this reason this kind of identification is not suited for remote usage. For example, when telnet was the standard protocol for remote logins, all the passwords were sent in the clear and were easily interceptable.

A way to mitigate the problem is to use one-time passwords, i.e., password used only once. It is very common, nowadays, to have OTP PIN generator devices for bank transactions, such as the recently questioned RSA SecurID.

We illustrate a simple and smart way to implement one-time passwords using one-way hash functions. Given a secret s and a one way hash function h we compute ht(s), i.e., h(h(… h(s)… )) t times, and we let the claimant and the verifier share this latter value.

This allows for t identifications with t different passwords. Since h is one-way, intercepting one password does not allow to compute the next password as this would amount to compute a preimage of h.