NX prevents execution of injected code on the stack in order to prevent shellcode injection. However, programs might disable it if they need to execute code on the stack. We can use scanelf to check if NX is enabled:

Even with NX enabled, an attacker can:

In general, NX does not prevent returning to code in segments that are (necessarily) executable!

NOTE: system “thinks” it has been called and looks for its parameter on the stack (“/bin/sh”)

ASLR randomizes the address space of

This requires brute-forcing to get useful addresses! However ASLR does NOT prevent jumping to program code (for example ROP, described later). Moreover, if addresses are leaked (e.g. recent timing side-channels attacks) it becomes void.

Return Oriented Programming (ROP) “composes” a shellcode by putting together small pieces of code (gadgets) that ends with ret:

When the function returns it jumps to the first gadget that executes some code and then returns, jumping to the second gadget, and so on. In principle, it is possible to concatenate an arbitrary number of gadgets so to obtain any functionality. Complex programs will in fact exhibit a variety of exploitable gadgets. Moreover, if it is possible to recover (or brute force) the library addresses then all of the gadgets “offered” by libraries would become available.

Stack protector rearranges variables, as we have seen in previous class. It also adds a control value just before function return address, as follows:

NOTE 1. In Linux the canary value starts with a null 0x00 byte. This prevents reading or writing it using overflows operating on string (as they would stop at the 0x00 byte). Thus, only the remaining bytes are picked at random.

NOTE 2. The origin of name ‘canary’ comes from the (sad) use of canaries to check for toxic gas in mines. A dead canary indicated a dangerous situation and the mine was evacuated.

We have seen various vulnerabilities that are triggered by bugs in C programs such as overflowing an array or printing a string directly, without the “%s” format string.

It is thus important to write programs that are not vulnerable, but languages such as C are subtle and it is hard to write secure programs without following coding rules and recommendations.

The SEI CERT C Coding Standard of the Carnegie Mellon University is an important resource that provides rules and recommendation from the security coding community.

Each guideline in the CERT C Coding Standard contains a risk assessment section that attempts to provide software developers with an indication of the potential consequences of not addressing a particular rule or recommendation in their code (along with some indication of expected remediation costs).

Each rule and recommendation has an assigned priority. Three values are assigned for each rule on a scale of 1 to 3 for severity, likelihood, and remediation cost.

How serious are the consequences of the rule being ignored?

How likely is it that a flaw introduced by violating the rule can lead to an exploitable vulnerability?

How expensive is it to comply with the rule?

The following picture (from here) provides possible interpretations of the priorities and levels: 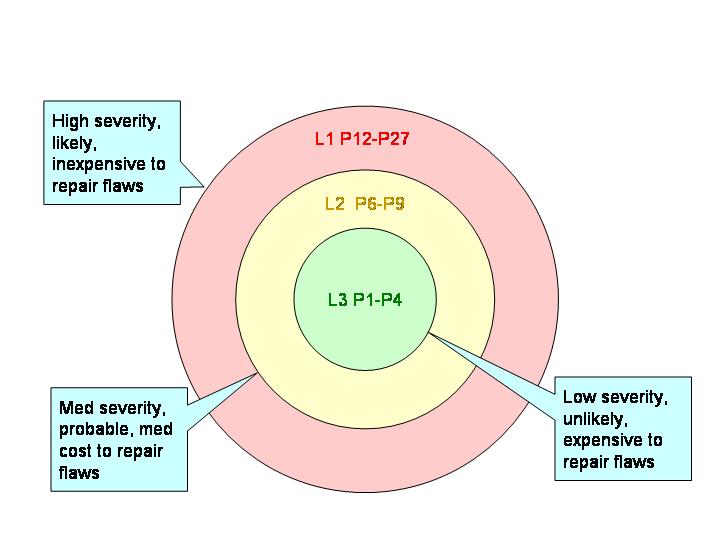 We show a few examples of rules and recommendations.

Rule 06. Arrays (ARR): “Do not form or use out-of-bounds pointers or array subscripts”. This rules states that you should never let array indexes go out of boundaries: it is crucial that indexes are always checked. For example:

Is not compliant as a negative index would correspond to a memory address before the array. It is necessary to fix the code by also checking that the index is non-negative:

Rule 07. Characters and Strings (STR): "Guarantee that storage for strings has sufficient space for character data and the null terminator". The following example is a classic off-by-one problem:

It might happen that the terminating '\0' is stored out of the array boundaries. Code should be fixed as follows:

Rule 07. Characters and Strings (STR): "Do not pass a non-null-terminated character sequence to a library function that expects a string". The following example contradicts this rule and another one:

String initialization does not have space for the terminating '\0'. It does not overflow but the string is ill-terminated. Code should be fixed as follows:

Clearly there could be a buffer overflow if msg plus prefix and suffix are bigger than buf. The code can be fixed by adopting the strlcpy and strlcat functions. They return the length of the string that was supposed to be built but truncate the string so that it fits the buffer, including the terminating '\0'.

This particular recommendation is evaluated as follows:

The code constructs string msg that is finally printed with fprintf as a format string. Since msg depends on user input this might trigger a format string vulnerability. A compliant version follows:

Rule 10. Environment (ENV): "Do not call system()". Use of the system() function can result in exploitable vulnerabilities, for example:

An attacker could manipulate the value of the HOME environment variable such that this program can remove any file named .config anywhere on the system. A compliant version follows:

Analyse the compliance to rules and recommendations of the following program and rewrite it to make it compliant: